GUEST CONTRIBUTOR: Chad Collins graduated from the University of Central Florida in 2019 with his Master of Arts. He works in behavioral health and has been a horror fan since birth. His favorites include: Scream, Halloween, Alien, tawdry ‘80s slasher films, and anything with a queer angle. Follow him on twitter: @ChadisCollins

Carol Clover, in her seminal 1987 book Her Body, Himself: Gender in the Slasher Film, engendered a long-overdue media discourse on the role women routinely played in horror films. The nomenclature “scary movies”—notoriously and undeservedly dismissed as tawdry and exploitative despite the longstanding influence of genre writers such as Mary Shelley and Henry James—is a pejorative lobbed toward films whose singular displays of grisly violence and audacious nudity ostensibly render them as worthless exhibitions in gonzo hedonism. However, Clover’s formative explication of the misogynistic principles that undergird the genre, while percipient and necessary, came a full decade after one of the most (at the time) denigrated films in the western horror canon: The Slumber Party Massacre (1982).

Clover’s analysis succinctly delineated the role women are almost always obliged to play in horror films. Constrained by their sexuality and requisite virtue, these women—coined “final girls” in Clover’s book—can dress, talk, and fight like men, but are strictly forbidden from making love or drinking like one. The “final girl,” Clover avers, is only the final girl after the first girl, the penultimate girl, and every girl in between—girls that have acquiesced to their lotus-eating impulses and flagrant exhibitions of sexuality—have been killed by the motivic and masculine killer.

The Slumber Party Massacre, upon first glance, appears to be nothing more than cult icon Roger Corman’s expedited and cheeseparing way of breaking into the remunerative slasher cycle early in a decade where Friday the 13th (1980), My Bloody Valentine (1981), and Halloween II (1981) were seeing some tremendous box-office returns. Corman’s disruption of the subgenre, though, yielded considerably more eminence than he may have intended; The Slumber Party Massacre is the first feminist slasher film. 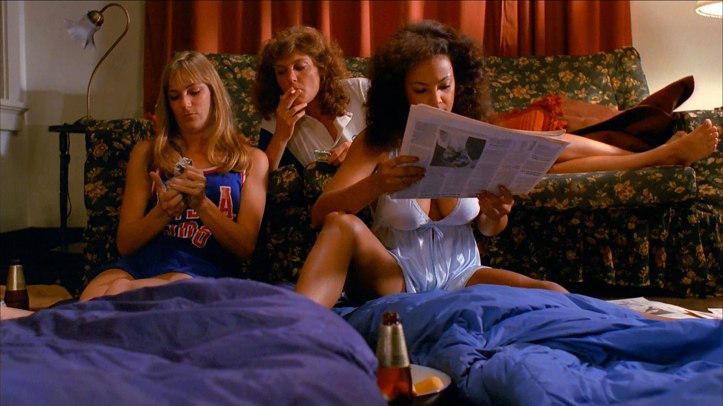 Ripe for criticism, the subsequent returns of the “Driller Killer,” the franchise’s primary antagonist, often employed the same cast (Melissa Moore is killed two times as two different characters in two of the films), and even recycled footage from erstwhile entries. The mercurial temporal timeline, for instance, adjusts the motivations of escaped convict Russ Thorn (Michael Villella), the killer from the first film, two different times. In Sorority House Massacre, graphic footage from the first film is inserted, and Russ’s name is changed to Bobby (John C. Russell), the homicidal brother of Sorority protagonist and lone-survivor Beth (Angela O’Neill). Sorority House Massacre II amends the serial narrative anew with the inaugural killer now known as Hokstedter (Michael Villella), and footage from the first Slumber Party Massacre was used to conceptualize a new series of murders in a new state.

The narrative volatility is certainly bewildering and demonstrative of why the series, particularly prefatory entry The Slumber Party Massacre, can be as maligned as it is. The first film, though, occupies an important niche in the horror cultural landscape for its unequivocal subversion of the final girl trope nearly a decade before the term entered the filmic lexicon.

Feminism, in the case of The Slumber Party Massacre, will be defined in the most foundational of ways, namely that it endeavours to advocate for equal treatment of women. The film, written and directed by self-proclaimed feminist Amy Holden Jones, treats men in the same manner that films in the genre often treat women; disposable sexbots. The men in the troupe are peripheral, killed long before any of the women are, and—in a stunning role reversal—sycophantic to the women, nebbish jocks in urgent need of sex.

Jones, while indulgent in female nudity, never actually films the women having sex; in fact, they are never so much as marginally intimate with any of the men. Clichés emblematic of suburban Generation X ennui, the men fraternize with one another, eager to procure an invite to the titular slumber party, though they never actually “score” with any of the women.

The horror genre, in particular, has perennially been one of the most gendered genres in cinema, and with The Slumber Party Massacre, Jones sought to envisage a film wherein the women behave comparably to the men. The women affect conventionally male characteristics and archetypes, among them the jock, stoner, and nerd, and while some of them do find themselves at the end of the Driller Killer’s power tool, they die as unconventional women—they die like men.

Scares should have no bias with regard to gender, and the women in The Slumber Party Massacre are not impotent in the face of a merciless slasher. They subvert gender roles and remain composed and resolved while the men around them crumble. The film ushered in an era of strong, emancipatory women in horror, however small that praise might be. The film certainly is not a feminist revolution, but there is value and legitimacy there. After all, what other horror franchise—one that accompanies six distinct films—has been directed and written exclusively by women? Even in 2020, not one.

The violence in The Slumber Party Massacre, particularly when juxtaposed with other films in the genre, is tolerably tame by dint of the negligible budget. The kills—save for one admittedly grisly chest slash—occur off-screen, only the heavily made-up corpses of the deceased coeds visible, suggestive of the savagery of the Driller Killer’s rampage, however cartoonish the vibrant crimson blood might look in retrospect.

Indeed, The Slumber Party Massacre is distinctly self-aware insofar as it eschews protracted suffering for bouts of humour and levity. The genre, at its most intrinsically misogynistic, often subjects its female victims to prolonged chase scenes, extended misery, and graphic deaths. Horror cinema frequently relishes in its own visibility, opting to rupture the conventional standards of decency in an effort to solicit audience attention with aberrant death scenes. When The Slumber Party Massacre does choose to indulge in more visceral exhibitions of carnage, though, the victims are uncommonly men—the pizza delivery guy (Aaron Lipstadt) gets his eyes gouged out while Kim (Debra De Liso) is tenderly stabbed in the chest.

Beyond its clemency for female victims, The Slumber Party Massacre imbues the ostensible narrative—insofar as “killer attacks girls at a slumber party” can appropriately be called a narrative—with a remarkable amount of symbolism and thematic undercurrents. Women in horror films are often killed by virtue of their sexual promiscuity, but this film, and nearly every follow-up, subverts the problematic rhetoric for something arguably as problematic but veritably more progressive; the safety in sex. In fact, even a perfunctory reading of The Slumber Party Massacre yields the same moral message, namely that the inordinate trepidation women feel with regard to losing their virginity often engenders more harm than the actual intercourse. The women in the film are not killed for having sex—they are killed because they are not. 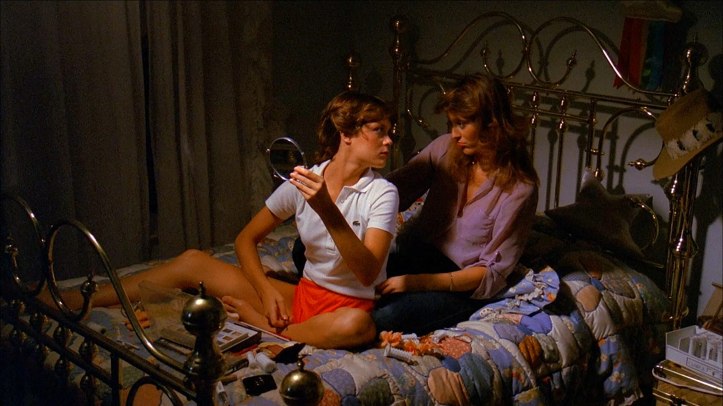 Controversial at the time, and perhaps even more so today, The Slumber Party Massacre merits credit for destabilizing longstanding norms within the genre—sex equals death—while averring that female sexuality is nothing to fear. The Driller Killer’s weapon of choice further augments the unconventional sexual politics in the film—as the name implies, Russ Thorn uses a power drill. The Freudian undercurrents and phallic imagery are potent—the coeds are afraid of the symbolic penis and it kills them. In a transgressive reversal of traditional castration fantasies, the women metaphorically conquer the drill and sever the tip in the visceral climax. They fully embody the sexual liberation inaugurated by second-wave feminism, and rather than the castration serving symbolically to visualize masculine fears, it serves to empower women and dispel popular collective myths about the danger in losing one’s virginity.

The violence in the film is the most oft-cited reason The Slumber Party Massacre is as denigrated as it is, but unlike other substandard slasher films from the lucrative decade, the movie is a parabolic tale that encourages and defends female sexuality. Jones made a deliberate decision, cognizant of the public discourse, to separate violence from female sexuality, choosing instead to pair celibacy with death. The Slumber Party Massacre is more than naked women getting butchered; it is an uncommonly progressive and knowingly feminist horror text.

The Slumber Party Massacre, beyond the fervent demands of horror audiences, might not be a particularly good movie, but its legacy warrants more. There is purpose and integrity to the filming and script, a desire to transcend the genre, and an impetus for a national conversation about public perceptions of women.