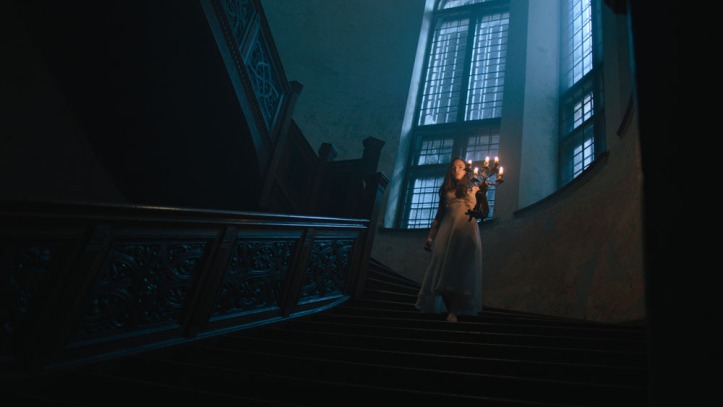 Considering the popularity of Victorian gothic ghost stories, the dearth of contemporary horror films with the same properties is a little perplexing (Crimson Peak hive activate!). Enter The Sonata, the feature directorial debut of Andrew Desmond (who co-writes with Arthur Morin), which aims to rectify this.

The Sonata is a four-way co-production between Russia, Latvia, France and the UK, but the film is set in the latter two countries. It tells the story of Rose Fischer (Freya Tingley), a violin prodigy with a secret family connection to legendary composer, and recluse, Richard Marlowe (Rutger Hauer). Rose is Marlowe’s estranged daughter and, as a result of his abandonment of her when she was a child, Rose wants to achieve fame without relying on his name.

The film begins with surprisingly little exposition. Following a point of view shot of someone – eventually revealed to be Marlowe – literally setting themselves on fire, the action cuts to Rose, who worries that her career is stalling under the cautious guidance of her agent, Charles Vernais (Simon Abkarian). The truth about her lineage is revealed when she learns that she has inherited Marlowe’s palatial French home, which leads to a tense disagreement between pupil and mentor. Rose leaves to go to France, while Charles stays behind in the UK to sit and stew.

From here, the narrative is relatively straightforward. Rose quickly discovers that her father was an unpopular recluse; that he was working on a secret sonata that he clearly intended for her to discover; and that in order to understand it, she must uncover and decrypt a series of mysterious symbols scattered around the house and surrounding grounds. The mystery is admittedly a bit rote and audiences won’t have any difficulty staying at least three steps ahead of Rose or Charles, who is called in when spooky events begin occurring. 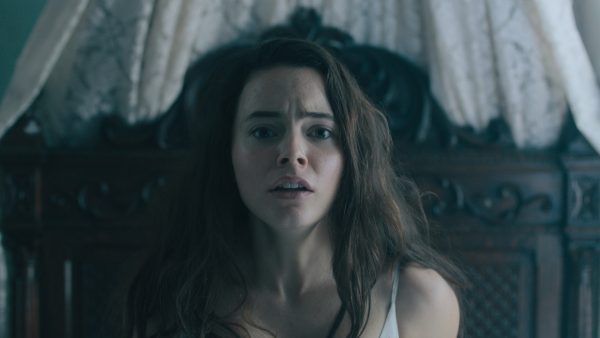 There are two main reasons to check out The Sonata:

1) The atmosphere of the film, which includes a gorgeous empty castle and haunted woods replete with mist and the cries of ghostly children. Desmond and production designer Audrius Dumikas lean into the film’s gothic horror aesthetics as Rose slowly becomes more and more paranoid and panicked as her father’s plans are revealed. Billowing curtains, dutch angles and swirling, dizzying shots feature prominently. Similarly the art direction by Janis Karklins, particularly the look of a triangular cottage buried deep in the woods with secrets straight out of Hostel looks evokes a cross between a fairytale and a nightmare. And while most of the daywear is functional and modern, Rolands Peterkops acknowledges the romantic history of the subgenre with Rose’s striking pale cream nightgown, which features prominently in the climax.

2) The Sonato‘s other strength is the unexpected commitment to character work in Desmond and Morin’s script. Marlowe is a cipher in the film: he looms large over the proceedings, but Hauer himself is barely present (he appears twice and only in video). This leaves Tingley and Abkarian to carry the film almost exclusively on their own. There are other characters in the film, notably Marlowe’s housekeeper Thérèse (Catherine Schaub-Abkarian) and researcher Sir Victor Ferdinand (James Faulkner), but they exist principally to deliver exposition and make ominous declarations. Other characters, such as merchants and pub patrons, are mere set dressing to reinforce Rose’s isolation and confirm that her father was the local boogeyman. The Sonata works best when it focuses on the relationship between Charles and Rose, which is one of both surrogate father/daughter and talent/manager. The latter complicates the former, which is where all of the tension comes from. Rose’s initial desire to reconnect with her deceased father’s work is quickly eclipsed by her fears that the sonata is evil, but Charles – as a failed artist and struggling agent – refuses to let the notoriety of Marlowe’s final work pass them by. This push/pull and the closeness of their relationship drives the film, setting up a climax that is a sadly a little predictable and underwhelming, albeit well-shot and theatrically edited.

The Bottom Line: Despite sticking to a familiar playbook, The Sonata is an enjoyable reminder of the atmospheric power of gothic horror, which pairs nicely with the horror genre’s recently revitalized interest in satanism. Come for the gorgeous production design and the complicated surrogate family dynamics; stay for the nihilism.

The Sonata is available in select theatres and On-Demand January 10.