The main thought I had after watching The Haunting of Sharon Tate (2019) was about choices. This film made a lot of them and I’m still—a week later—trying to wrap my mind around why most of them were made. 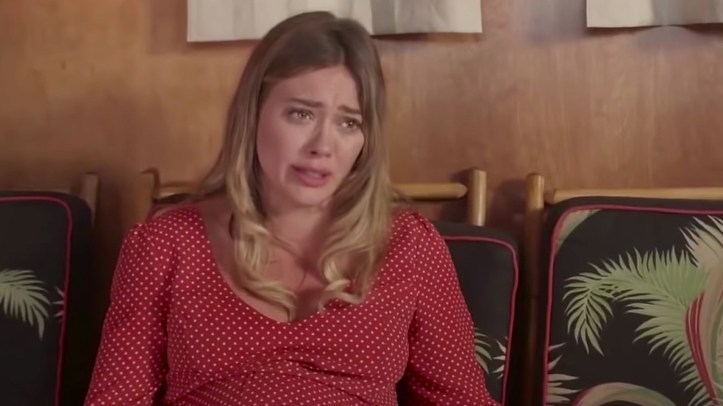 When I say this movie is bad—like bad bad, not good bad—it’s because I can’t understand any of the creative decisions that made it into the final cut. I question the level of taste of everyone involved. I don’t really mind a film being exploitative as long as there’s good faith behind it. And while I’m not sure there’s a sophisticated way of showing the murder of Sharon Tate and her friends, this film still ain’t it. Not by a long shot.

Writer and director Daniel Farrands isn’t interested in re-telling the story of what actually happened despite the long, slow pan we get of the bodies and newsreel footage at the beginning of the film. It’s a shocking and, dare I say, tasteless way to start the film, and it ultimately doesn’t matter since realism isn’t a primary focus here. Because what Farrands is really interested in exploring here is not a heinous crime, but theories about alternate realities and like, the choices we make in life. Are our fates set out for us, Hilary Duff as Sharon Tate wonders out loud, vapidly, or do we, like, have other choices?

I know you’re confused, but so am I. The film opens by setting up the basics of the Tate murder case: it’s just a few weeks before the baby is due and Sharon Tate (Hilary Duff) and Jay Sebring (played so poorly by Jonathan Bennett that I can’t even be happy at his first major role since Mean Girls) are arriving at her new home while “Roman” is in Europe. Her friends Abigail Folger (played by Lydia Hearst who’s Patty Hearst’s daughter, oddly enough) and Wojciech Frykowsky (Pawel Szajda) are also staying there to keep her company.

One afternoon there’s a knock at the door and Tate and company have their first interaction with Charles Manson, who shows up looking for Terry Melcher (the home’s previous occupant). Then the creeps begin—bumps in the middle of the night, shadows at the windows, the girls feel like they’re being watched when they’re out for a hike. Soon, mysterious packages with weird songs by Charlie start showing up at the doorstep.

From there, the movie spirals. I was surprised when the murders were re-enacted quickly at the forty-minute mark—but it turns out, in this film, it was all a dream. Taking a dubious quote from an interview with Sharon Tate where she describes a “psychic vision” she had of her and Sebring having their throats cut, Farrands constructs this entire premise of Tate having visions of her impending doom. She keeps telling her friends that she’s being stalked, but they don’t believe her. She keeps having intense visions—like, ‘bathtubs filling up with blood’ intense—yet still continues to stay in this house to try and figure it out, I guess.

Tate gets local youth Steven Parent involved in this mess and that’s where shit gets weird. Tate and Parent play one of Charlie’s songs backwards and hear “Helter Skelter”. Parent starts talking about satanic cults and devolves into a rant about the government and capitalist conspiracies.

I’m not making that up.

So, armed with the knowledge of her own death with “facts” that no one could have known at that time, Tate is able to circumvent her own murder and kill her killers. It all culminates with Duff as Tate screaming “Fuck you!” and shooting Tex Watson in the face. (Spoilers, sorry.)

But she’s not actually alive anymore in the present. Morning comes, Tate and her friends are still alive and as they all leave the property, Sharon sees her dead body and the dead body of everyone else. Because what happened was just one reality, and there are many realities and you can’t stop fate. Or something like that, it’s very high concept.

So where do I begin? As stupid as this plot is, it’s complemented by equally inept filmmaking. The pacing is bad enough to make the film boring and the movie just doesn’t look good. Duff as Tate is questionable. She uses an accent that I can’t place—it’s some weird British-American hybrid—and she’s dressed in outfits that look like they’re from Forever 21. This is Sharon Tate we’re talking about.

All of the little details just aren’t right. I’m fairly confident that everyone just read the Wikipedia page and called it a day. Farrands doesn’t even get basic, easily researchable facts right, like the fact that the murderers wrote “PIG” in blood on the front door, not on a window on the back door or that the caretaker lived in a guest house, not a trailer.

The worst part of the whole thing is trying to frame it as something preventable, something that could have been avoided maybe if they had fought back. I just think it’s worth noting that when we’re talking about the Tate murders, we’re talking about real people. Who had friends and families who still feel the loss of a loved one. I get that it’s also a cultural moment. I’m as obsessed as the next person. But, to quote the wise Dr. Ian Malcolm, I think we can all agree that just because you can do it doesn’t mean you should. And if you’re going to do it, you can do a lot better than this. Having these victims kill the hell out of their murderers as some alternate reality conspiracy shtick is just lame.