Better late than never! Unfortunately, my Toronto After Dark 2018 experience was marred by the onset of a severe cold which developed into bronchitis, so I was unable to catch any screenings in the theatre and am only now beginning to crawl out of a fog of Nyquil, headaches, and exhaustion. (Still waiting for my awful cough to subside, though!)

The lively city centre at the heart of Amsterdam hosts a deadly game of ‘catch me if you can’ in Prey (AKA Prooi), written and directed by Dutch cult horror icon Dick Maas. This time, his monster isn’t a killer elevator or a sadistic Santa, but something (slightly) more plausible.

The premise is simple enough: the city of Amsterdam is terrorized by a mysterious (and unusually large and lethal) lion prowling its streets. This particular apex predator is fastest, larger, and far more bloodthirsty than his fellow lions at the zoo, where protagonist Lizzy (Sophie van Winden) works as a veterinarian. Where did this lion come from? We never quite find out for sure, but that doesn’t stop it from racking up one hell of a body count on its tour of the city.

Stymied by the question of how to track and kill the powerful predator, the city government and police chief agree to bring in a professional hunter, Lizzy’s ex-boyfriend, Richard (Mark Frost), a fact that doesn’t exactly thrill Dave (Julian Looman), Lizzy’s caddish but charming current love interest. Naturally, the hunt doesn’t wind up being a walk in the park—not exactly, anyway.

Van Winden is immensely likeable in the lead role, bringing a down-to-earth practicality, intelligent humour, and resilience to her character. Looman hits the balance between confident and obnoxious in his portrayal of Lizzy’s would-be paramour and the two share a believable and easy chemistry. Frost’s rakish Jack brings a fantastic element of comic relief (and actual competence) to the desperate hunt. 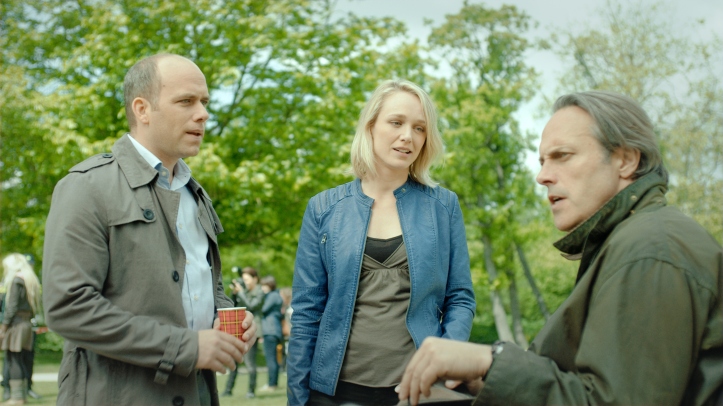 Prey has earned a bit of hype during its time on the festival circuit, and for good reason—it’s a hugely entertaining, tightly-scripted story that combines a good deal of wry and subtle comedy with some silly but effective gore and a number of genuinely tense sequences.