Guest contributor: Ali Chappell is a writer, personality, and actor who holds a degree in both business and musical theatre. She is skilled in the art of balancing spoons on her face and, after three drinks, is really good at throwing axes. She is obsessed with horror and romcoms and can often be found in a movie theatre with a glass of gin and bag of popcorn. Follow her on twitter and Instagram at @thealichappell. 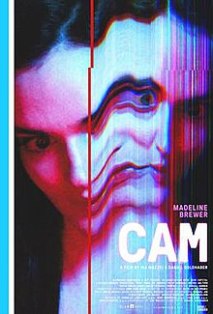 Cam (2018) premiered at Fantasia Festival 2018 in Montreal, Quebec and tells the story of a cam girl named Alice (or Lola, to her fans), played by Madeline Brewer. While on a quest to crack the Top 50 girls on her site, her channel is hijacked by…her? In a bizarre and compelling twist, she is hacked by a clone of herself, who is apparently way better at being a cam girl — suddenly her ranking is going up (well, down…because you want to be number 1. You know what I mean).

You can only imagine how frustrating this must be to try and explain to customer service.

Cam neither shames nor promotes camming or sex work in general. It simply shows a girl in this position, trying to get the help she needs to save her channel. When I noticed that the film was directed by a man, I was taken aback. Can a man really understand what it is like to be a cam girl? 95% of the time, I would say no, but in this case, I totally approve. This is Daniel Goldhaber’s debut film. He and writer Isa Mazzei have created a film that shows that they did the legwork; you can feel the authenticity in every scene. I cannot vouch for this movie enough. If you get the chance to see it, you really need to. It’s worth it.

I recently got to sit down with Daniel Goldhaber and Isa Mazzei to talk about the premiere of the film and how it all came to be. Heads up, it’s an adorable interview. Try to not say “aww” too much.

This is your first feature and it’s a pretty ambitious story to tell. How did you two get involved with each other?

Isa Mazzei: We have known each other since high school.

Isa: Yeah, we dated in high school. I produced his high school plays. When we reconnected, I was working as a cam girl and I needed some videos shot, some pornography videos, and I knew that he was a filmmaker — and a talented filmmaker. So, I asked him to shoot some videos for me. He came out and we worked together and he was just fascinated about the camming world and with my shows and my guys. So, we talked about it and we felt that we really wanted to bring that world to a larger audience. We talked about doing a documentary, we talked about what we could possibly do. Then we decided that we really wanted to do a thriller. We love horror. We love genre film. That is where we started from.

Isa: I think that I brought as much as of experience to it as I could and we definitely tried to include other sex workers and try to speak to their experiences, too. But it was very important to have me there because it is a world that has so much nuance. I think it would be really difficult for someone who had not experienced it to accurately portray what it is like to show your naked body online for money. It’s just so specific.

Daniel: And the deal that I struck with Isa, basically when we started working on the project, was that I would cam as well before making the movie. A week before production, I didn’t tell anybody what my username was [laughs] but I did a bunch of shows. To feel the vulnerability of ‘my naked body is online now’; there is this weird feel to it the first time you are in that position and there’s just something to it. I also just want to say that the authenticity of the movie, and also the success of the movie feeling authentic goes beyond just Isa’s experiences as a camgirl. It’s also just a real testament to her storytelling ability and her ability to render her experiences in a way that an audience is able to access. Taking the genre ideas and the genre experience that she had as a writer and a horror film fanatic, and combined that with the life experiences she has. And I think we both have.

Amazing. So, working together, how did you incorporate her vision into the world you created. Did she influence how you shot anything?

Daniel: When we started moving forward, when we started working on the script together. It just became very clear that we were not writing a script, we were writing a movie and we were writing a vision of the film. Very, very early on, we came up with this idea of co-authoring the movie. It’s 100% a shared vision. 100% mine and Isa’s. So, that was kind of the methodology in the beginning of how we were moving forward and then everything kind of fell into that. Isa can speak to that.

Isa: I was in casting. I was in pre-production. I helped find our DP, our makeup, I was on set.

You were heavily involved. That is amazing.

Isa: I was heavily involved from the get-go. It really was a co-authored film.

Did you work with the actress who played Alice?

Isa: I did, yeah! I worked with Madeline [Brewer] a lot. It was actually the first time I’d met her. We had lunch for, like, three hours and we just talked about everything and it was incredible. She had such a definite understanding already, just because of the script and from her own life experiences. We spent a lot of time together kind of working through it and she brought a lot of her own ideas to the character. Which I really appreciated.

What were the highlights and lowlights of filming something of this nature?

Daniel: For me, the highlight was having the opportunity to pioneer what I think is a really fresh and cinematic language. That was something that we were not only doing on set but also it went all the way to the edit. You have these sequences where you have these five big cam sets in the movie and each one is its own little musical number or action scene where you are kind of cutting between the Alexa (which is the main camera), the webcam, and the screencap above the monitor cam. Being able to have the opportunity to kind of make scenes that are really fractured and audiences go into and they just get it and it doesn’t formally feel experimental. That was so exciting.

Isa: Yeah, it was really tricky with the website. We actually built FreeGirlsLive as a real functional site. Isabelle Link-Levy (producer/co-writer) was on set, cueing all the messages and tipping.

Isabelle: [Adorably sarcastic and working nearby] It was totally fun!

They all burst into laughter.

Isa: No, it wasn’t! [Laughing hard] But yeah, it took weeks to film all the cam shows. So, every character in her chat room has their own personality, their own speaking style, their own syntax. They had jokes with each other. Getting that to work with the actual script so that Madeline would have these playing live to her. She’s actually responding to them so that we would get that realistic feeling and performance of what it is like to talk to a computer and then talk to these men in her room. It was really exciting but also really difficult, for sure.

Daniel: Her pink room set is like the highlight and challenge in the sense that you have this opportunity to build this incredible space that is just like a fever dream. Fantasy. It was really wonderful. But, having said that, it was also a nightmare. It was a teeny little 360-degree box that you’re in for seven days. Madeline alone in the room is an incredibly complicated scene. You’re in that space for 12 hours a day and you go outside and everything is just green for the rest of the night. You’re basically blind. Not to mention, you have to figure out how to light it. It was tough but I think we did it.

Isa: Absolutely! Absolutely! I would say that is the number one goal of the film (and we really did try at every stage) was to incorporate as many other cam girls and other types of sex workers as much as possible. There are several sex workers in the film. We showed the script to sex workers before we locked it. We showed different cuts of the film to sex workers and cam girls to make sure that we included as many perspectives as possible and that it felt authentic to many different people within the sex industry.

Daniel: Another cool thing: there was actually a performer in one of the cam searches screens who discovered camming from the movie and is now a cam girl.

Cam has been acquired by Netflix — keep an eye out for the release date. It’s definitely worth a watch!