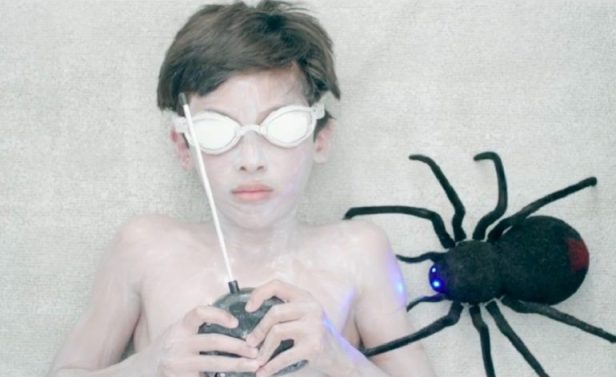 Early on in director Patrick Cunningham’s disturbing family thriller Model Home, there is a suggestion that the single mom/son combo at the heart of the narrative will eventually face off against the haggard looking man who has been robbing the model homes in the abandoned cul-de-sac that they have recently moved into.

Beleaguered realtor Brenda (Kathy Baker) offhandedly mentions to down-on-her-luck mom Camila (Monique Gabriela Curnen) that when the housing market bottomed out, there was a string of robberies in the empty homes. The innocuous dialogue works in conjunction with a series of cutaways to the questionable looking unkempt man, queuing audiences that not only is the house that Camila and her young son, Jaime (Luke Ganalon), moved into unsafe, but that a dramatic, if not violent, conflict is brewing.

It both is…and isn’t.

This is the power of Cunningham’s feature film debut, which has the tendency to both misdirect audiences and simultaneously deliver exactly what they are most afraid will happen. Model Home wears its ambitions on its sleeve, posing only briefly as a potential home invasion thriller before settling into a domestic drama about the perils of unchecked mental health, which is where its true interests as a film lie. Then, just when it seems as though the film has no further mysteries to unravel, a bloody, gripping third act reverts back to its original thriller premise, paying off both narrative threads in equal parts grisly and sad.

Following a flashback – or a dream sequence – involving a room painted entirely in white (the truth is revealed in time), Model Home opens with mother and son on a guided tour by Brenda of their new “home.” It’s evident from the start that Camila and Jaime have suffered some kind of trauma and the job re-gentrifying the abandoned neighbourhood for Brenda is an opportunity for a start fresh.

The relationship between mother and son is unique – Jaime is consistently left to his own devices in the desert wasteland; as the lone child he makes friends with stray dogs, headless dolls and characters in his imagination. Jaime is clearly a resilient child, but he’s undoubtedly still a little boy who has been saddled with the responsibilities of an adult.

His other role is timekeeper: throughout the film he repeatedly prompts Camila to take her pills. Naturally when she secretly stops taking them near the end of the first act, it is a significant red flag. 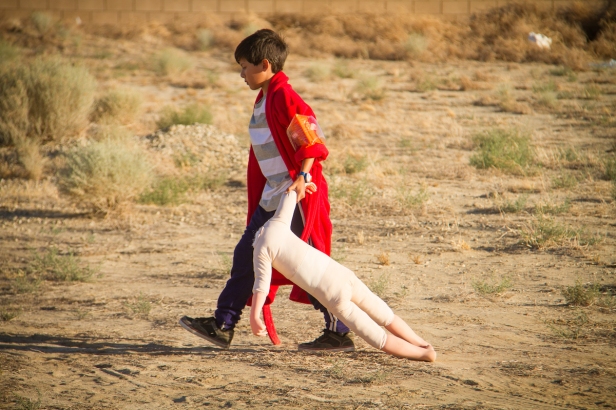 It’s not long before Camila’s behaviour becomes increasingly erratic. She calls people at all hours of the  day and night, dedicates herself wholesale to making paper mache crafts from the local Craft Town USA store and neglects her son to the point of abuse. As Camila’s paranoia grows, the danger to the people around her – including potential Craft Town USA paramour Walt (Jon Jon Briones), Brenda and her son – escalates in tandem.

What makes Model Home so compelling is that the narrative is like a slow moving car crash: the danger and violence can be seen from miles away, but there are no mechanisms in place to offset the damage. Cunningham and William Day Frank’s script is careful not to make Camila’s mental illness the “villain” of the film; rather, Model Home is a sharp critique of a system that enables the isolation and marginalization of low-income, single families and individuals suffering from mental health challenges.

The truth behind the white room subtly confirms the circumstances that led Camila and Jaime to their current predicament, but there’s no suggestion that anyone is following up or checking on the family. They truly are abandoned in the middle of the American desert to fend for themselves. Shocking no one, it doesn’t end well and one scene in particular involving a hammer is sickening, bloody and sad.

Model Home is not an easy film to watch, despite moments of levity and the loving relationship between Camila and Jaime (when she is well). Still, it is undeniably powerful and uncomfortable in all of the ways that a good thriller should be.

This is a film that deserves to find a large and passionate audience and I strongly encourage horror fans to seek it out when they can.