GUEST POST: Joe is a TV addict with a background in Film Studies. He co-created TV/Film Fest blog Bitchstolemyremote.com and has written for Bloody Disgusting. He enjoys graphic novels, dark beer and plays multiple sports (adequately, never exceptionally). While he loves all horror, if given a choice, Joe always opts for slashers and creature features. Follow Joe on Twitter @bstolemyremote and be sure to join the Bstolemyremote FB group for daily TV and film updates!

Watching the film, I was actually reminded more of Resident Evil. Both films feature beautiful heroines who wake up with amnesia and are forced to explore a ravaged medical facility housing blood hungry monsters, collecting a ragtag group of survivors along the way. Here, that heroine is Ellie Barnes (Lara Gilchrist), a damaged single mother and drug addict who ODs in the pre-credits scene and wakes up strapped to a gurney with no memory of how she got there.

The first half of Blood Hunters plays out like a haunted house mystery. We follow Ellie as she wanders from room to room, uncovering mauled dead bodies and general destruction. Occasionally, an ominous proclamation echoes out over the PA system that the backup generator is running out of power, which in horror movie speak is code for “bad sh*t is about to go down.” 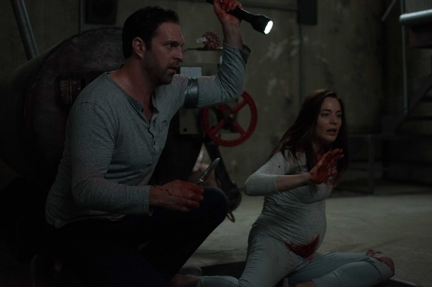 Eventually, Ellie meets another survivor – a quarantined patient named Henry (Benjamin Arthur), a quasi-love interest and the film’s comic relief – before collecting tech specialist Marion (Torri Higginson), George the Intern (Mark Taylor) and Father Stewart (Julian Richings, Canadian genre royalty). Answers to the mysteries are doled out slowly: the what of the facility and the experiments and the who of the creatures stalking the survivors (shot primarily in the shadows for the first half before full exposure in the second half).

Lee keeps a firm handle on the visual aesthetic and tone throughout. She makes the most of what is clearly a shoestring budget: capitalizing on the lighting and set design to make the facility look much larger than it undoubtedly was and repurposing the creatures to make them seem far greater in number (I was shocked to discover that there were only four actors). Lee’s direction in the interpersonal scenes is stronger than her action scenes; the dialogue-heavy scenes with actors easily invite audience identification, particularly anytime Ellie and Henry are featured.

If Lee delivers on the tension of the ticking clock and elevates the generic aesthetic of the
facility, she is hampered by a clumsy script by Corey Brown. The film’s biggest weakness is that Brown includes two climaxes: one when Ellie goes into labour and then a more traditional final showdown with the creatures. Unfortunately, this kneecaps the escalating tension halfway through the film, making the second half of Blood Hunters feel drawn-out and slow. The film eventually recovers and partially justifies this creative decision, but it does make the middle section sag. Additionally, the explanation for Ellie’s pregnancy, the existence of the creatures and the resulting human conflict is mildly underwhelming and contrived.

Still, these issues are forgivable, considering the quality of the acting and the set design, as well as a few thrilling sequences, including one gruesome body horror amputation involving a heated kitchen grill. One major pleasant surprise is the quality of the creature effects. Traditionally, low budget independent horror films shy away from the creature reveal for as long as possible because there’s no budget for FX and the horror is undermined when the creatures are fully visible. Not only does Lee know how best to shoot her creatures, Blood Hunters’ full body creature make-up is unique and looks great on camera. It’s a major asset considering how prevalent they are on camera in the film’s second half.

Overall, Blood Hunters is a fun, enjoyable monster film featuring good acting and strong direction. Although there are some creative hiccups in the screenplay, it is well worth checking out on VOD.