If you’re doing Toronto After Dark right, it should take about a week to recover. Between the many screenings, the long waits in line, the doughnut diet, and the beer-fuelled socializing afterward, it’s a full experience. Lucky genre fans will make an awesome new friend or two along the way! Now that I’ve had time to settle back into regular life, I’m ready to share a few more thoughts on Toronto After Dark 2017.

You may have seen (or even contributed to) Dead Shack’s kickstarter last year — it raised over $12k dollars for the film’s visual effects budget. I can’t imagine that any of the donors regretted their generosity, as Peter Ricq’s Dead Shack is an incredibly entertaining indie zombie thriller centred on a hilarious and relatable family unit who rent a discount cabin in the woods one weekend, only to find that their closest neighbour has some pretty unconventional (and highly dangerous) pets.

The script was co-written by Ricq, Phil Ivanusic, and Davila LeBlanc, and I was immensely impressed with the pitch-perfect dialogue — sibling rivalry has rarely achieved such accurate representation on-screen. The chemistry and performances were impeccable, which contributed to a strong emotional investment in each of the main characters (which really comes in handy when the undead-next-door begin to disregard property lines). The film’s strength lies solely in its heart, and not in the ripped-out-of-the-chest kind of way. In fact, there is rather little gore to be seen, but you’ll be grinning too much at the goofy camaraderie and familial warmth to notice.

Dead Shack is a low-key gem, and I highly recommend catching it on iTunes and VOD on October 31st. 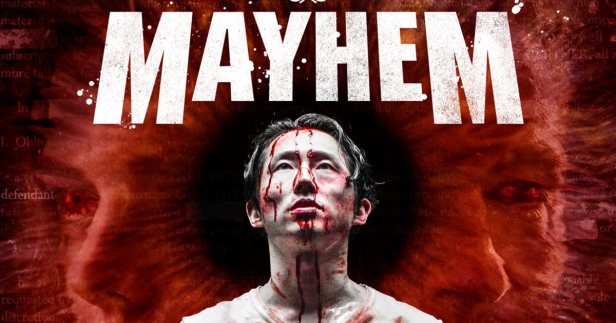 As a card-carrying Steven Yeun fangirl, I was fully on-board for whatever Mayhem had to offer — and that turned out to be a lot. Joe Lynch’s high-energy action-horror takes place entirely within the confines of a downtown office building, but it more than makes use of the space to create an epic outbreak adventure/revenge story/corporate morality satire that showcases the razor-sharp comedic timing of both Yeun and co-star Samara Weaving (The Babysitter), as well as their ass-kicking prowess. The film takes on a videogame-style structure, with mini-boss fights and a final, crowd-pleasing Big Bad showdown.

Samara Weaving could have chemistry with a damp paper bag and make it compelling to watch, so it’s no surprise that she and Yeun create sparks on-screen. Weaving steals every scene in which she appears, delivering a magnetic, tour-de-force performance as a brash and determined victim of a bad mortgage, hell-bent on revenge against the law firm who refuses to help her. As a lawyer who has given up pieces of his own soul to climb that fabled ladder to Partnerhood, Yeun convincingly spars with both corporate rivals and his own sense of complicity, leading to a satisfying (if predictable) character arc. I love any project that gives Steven Yeun the opportunity to flex his action and comedy muscles, so Mayhem is a definite win for me.

One of the best parts about Toronto After Dark is being able to see Canadian shorts screened before each film. There is so much incredible creative talent in this country! Here are a few that particularly stood out for me this year: 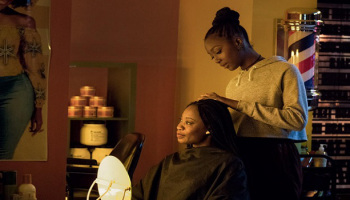 This gripping and well-produced short is both a tense mystery and an indictment of restrictive immigration policies, centring on a young hair stylist who accepts the wrong drop-in customer just after closing time.

When is the right thing actually the wrong thing to do? This interesting and disturbing short about a chance encounter between a panicked young woman and a good samaritan on an isolated road reveals the potential dangers of heroism.

There are few places as creepy as an old, empty theatre — especially if your dress rehearsals involve masks and robes, and the place seems inexplicably infested with strange little dolls. In this short, two actors may face their final curtain call.

Schwarzenegger fandom can get a little intense, as seen in this entertaining short about a young Arnold-obsessed man whose family just doesn’t get it.

Email chainletters are a benign horror in themselves, but what happens when you neglect to forward them can be deadly serious, as explored in this fun short that is the perfect throwback to the 90s teen slasher era.

Thank you, Toronto After Dark! I can’t wait until next year!